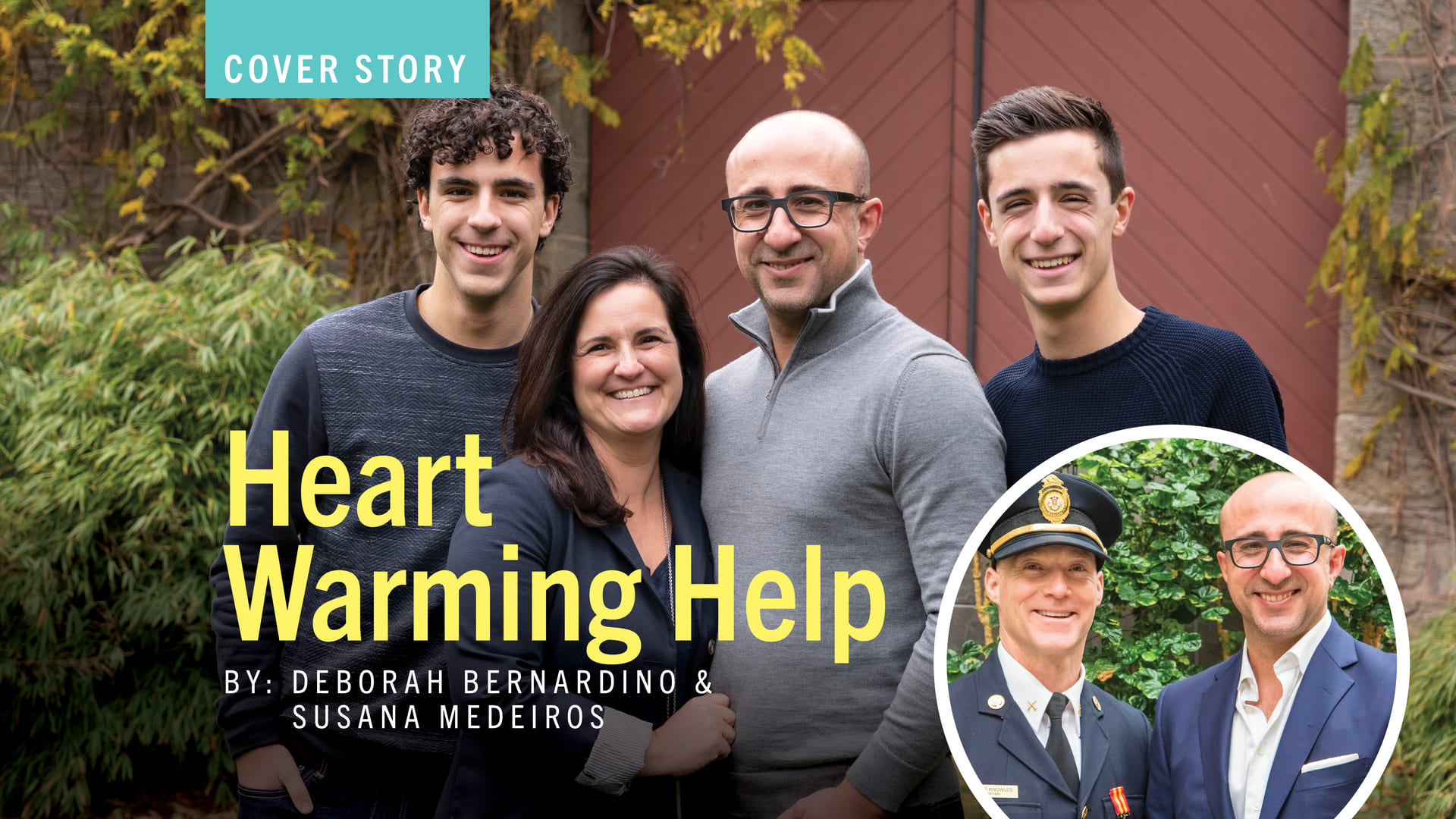 Paulo, Deborah and their teenage sons have been Milton residents for over 16 years. They have always been proud and very much aware that they live in a community where people genuinely care for and support their friends and neighbours — but they never could have fathomed the level of gratitude they would one day feel, until January 13, 2022.

Paulo had been doing some outdoor work at home, which required a quick run to the Waste Management site on Bronte. While driving into the site, Paulo suffered a heart attack which resulted in Cardiac arrest. The events that take place in the next 10 minutes, are true examples of heroism, bravery and nothing short of a miracle.

Steve Knowles, an off-duty, Oakville Firefighter had also been doing some home renos and was about to leave the dump while Paulo had just entered it. While passing one another, Steve noticed Paulo’s car slowly swerving off the road and into a nearby fence. Recognizing Paulo’s state of distress, he immediately called 911. Just a short distance away, 22 year old Jamie Sparkes, an employee at the Waste Management site, was mending a nearby fence. Also witnessing the incident he rushed over to see if he could be of help. Finding Paulo unresponsive in his vehicle, they immediately jumped into action and successfully pulled Paulo from his truck. While Steve started CPR, Jamie contacted his colleague, 22 year old COVER STORY Tyler McGuire to retrieve the defibrillator that is kept on location at the site. Within moments Tyler arrived and the defibrillator was set up and was discharged 3 times over an 8 minute period while Steve continued CPR. Their quick response, teamwork and unwavering technique kept Paulo alive until First Responders arrived on scene. In the moments that followed, Paulo was transferred to an ambulance and rushed to Milton District Hospital, where he was stabilized and then transferred to Trillium Hospital for surgery.

In the hours and days that followed the family were met with a barrage of First Responders. from Paramedics to Police Officers to Doctors and Nurses, whose actions did not go unnoticed during those hectic and emotionally filled moments. Deborah recalls “We felt supported, heard and so well cared for every step of the way”.

Deborah still finds herself overwhelmed with gratitude, “Not a day goes by that I don’t reflect on the events of that day. Why these particular individuals were placed in my husband’s path at that exact moment is a miracle to us all. They will forever be considered angels in our eyes. Angels that kept my husband from crossing over to the other side.”

While everyone involved has repeatedly mentioned that they “acted like anyone else would have” or that they were “just doing their jobs”, their actions speak volumes and have allowed Deborah to have her husband by her side and their boys to have their father.

Almost a year after the incident, the Vieira’s, Tyler, Jamie and Steve have created an unbreakable bond. Having recently shared a Sunday dinner together they expressed an undeniable feeling that, like family, they are forever connected. Steve, the off-duty firefighter shares with Family Matters “The more I get to know this family, the more I feel like I am the lucky one”. Steve tells us that he will never forget the feeling of the hugs he received from Deborah and their sons when he met them for the first time. “It was during a time of darkness in the world and it gave me a sense of hope and a new outlook on life”.

Paulo has absolutely no recollection of anything that occurred on January 13th. What he knows without a doubt is that he will be forever grateful for the many hands that tirelessly worked to keep him alive and the kind hearts that gave us comfort in our many moments of uncertainty. He is healthy and appreciates that he has a new lease on life. “I am filled with so much gratitude that I find it difficult to express through words or emotions. How do I thank someone for saving my life? I will be forever humbled by Steve’s will, love and actions that day.”

While it sounds like such a cliche, Deborah, Paulo and their boys have learned how precious life really is. Their lives have been forever impacted by the events that unfolded on that day. They now see the world through a different sort of lens and have grown their precious circle of family by a few more people. Steve, Jamie and Tyler will always have a special place at their table.