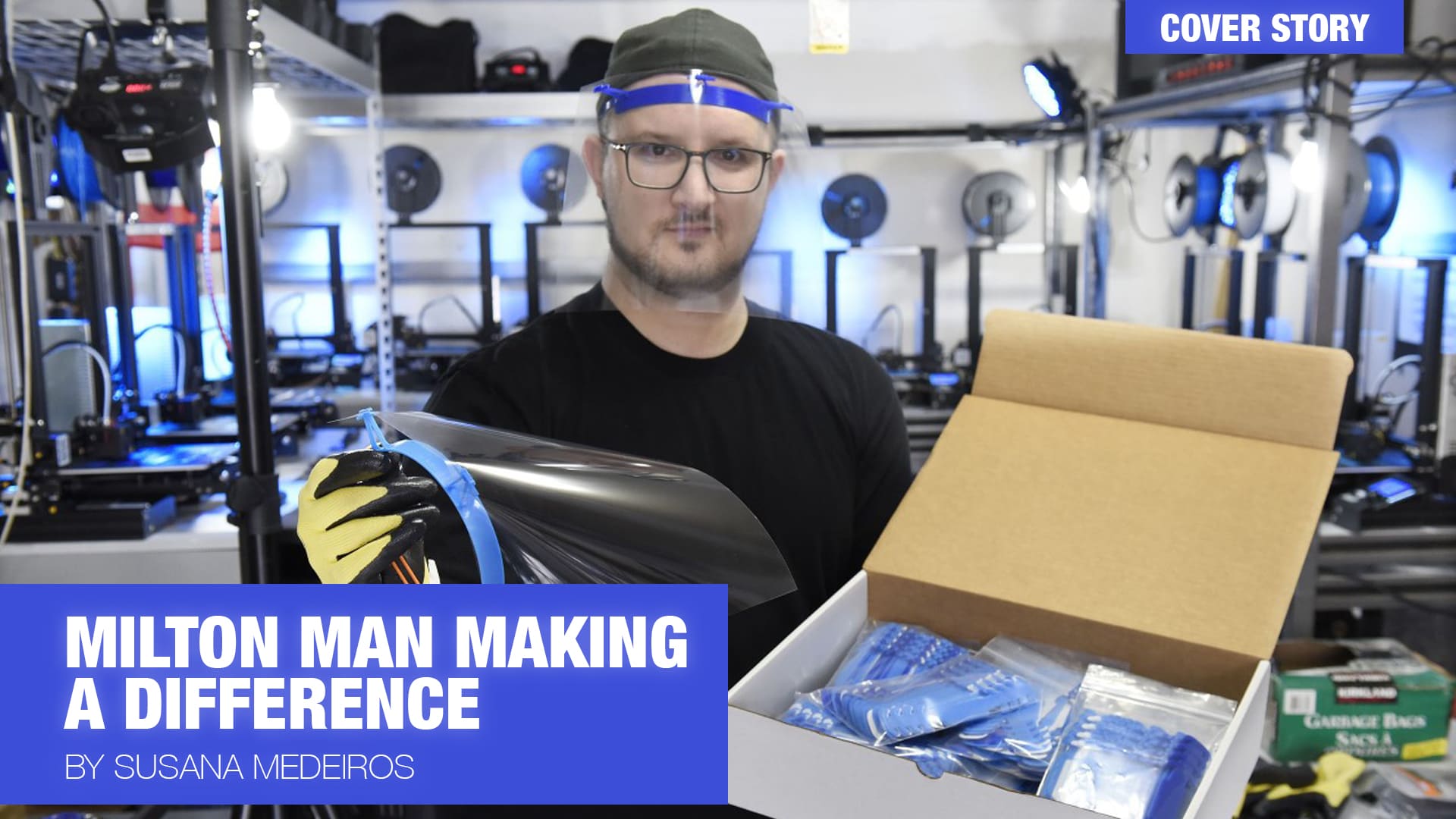 Before the Covid-19 Pandemic swept throughout the world, Ryan Dorland would never have imagined he would be an expert in 3D printing. A Motion Graphic Designer and Video Editor, he had been exposed to 3D models but it was not until a phone call with his cousin , near the end of March, that the shift took place.  Ryan’s cousin, Anne Marie Jack is a nurse in Whitby, swabbing patients on the front line.  They were having a phone conversation about how concerned and frightened she was about having to re-use PPE, due to a shortage.  After he hung up, he could not let it go.  He put a post up on social media asking if anyone had an experience with 3D printing. Within thirty minutes, a friend Will Parsons reached out with some Amazon links.

Ryan quickly learned that it would cost about $500 to get one machine up and running.  He wanted to fund the project himself, but with all of the uncertainty out there the couple set up a Go Fund Me Account. Within 12 hours, their fundraiser had raised enough money to purchase 3 machines. Ryan began printing face shields designed by 3D Designer, Shawn T. Lim, that were initially approved for use at the Michael Garron Hospital, as well as the 3D Print Community supplied ear savers. The couple thanks Nuno Rocha, owner of The Diamond Studio in Toronto, and Anna-Kay’s employer for providing an initial donation that helped kickstart everything. Within 2 days, three 3D printers were in Ryan’s garage.  “The first one took me almost 3 hours to build,”  Ryan recalls.  Apparently, they do not come assembled.

Before long, Ryan had 12, 3D machines in his garage.  He thanks Tom Norris of Norris Electrical for his help with installing a 20 amp plug to handle the power demand.  He also consulted with the local fire department to ensure everything was being done safely.  Ryan even has had to have a storage POD delivered, compliments of his colleagues at Bond Brand Loyalty, so that he can store belongings to make room for this new workspace.

Ryan’s work days in his new 3D Printing assembly plant runs from 7 am to midnight. This initiative has raised over $17, 000 and produced over 10, 000 masks and ear savers.  The Personal Protective Equipment has been donated to over 26 different hospitals, Community Living Centres and Long Term Care facilities. Ryan tells us that the plan for the machines, once the pandemic is over, is to donate them to dedicated 3D printing organizations where they will be used for education, such as training students how to manufacture necessary equipment and products.  Until then, for as long as there is a need, the production will continue and Ryan and his wife, who he admits has been his biggest supporter, will continue to operate and produce these very much needed pieces of PPE equipment.