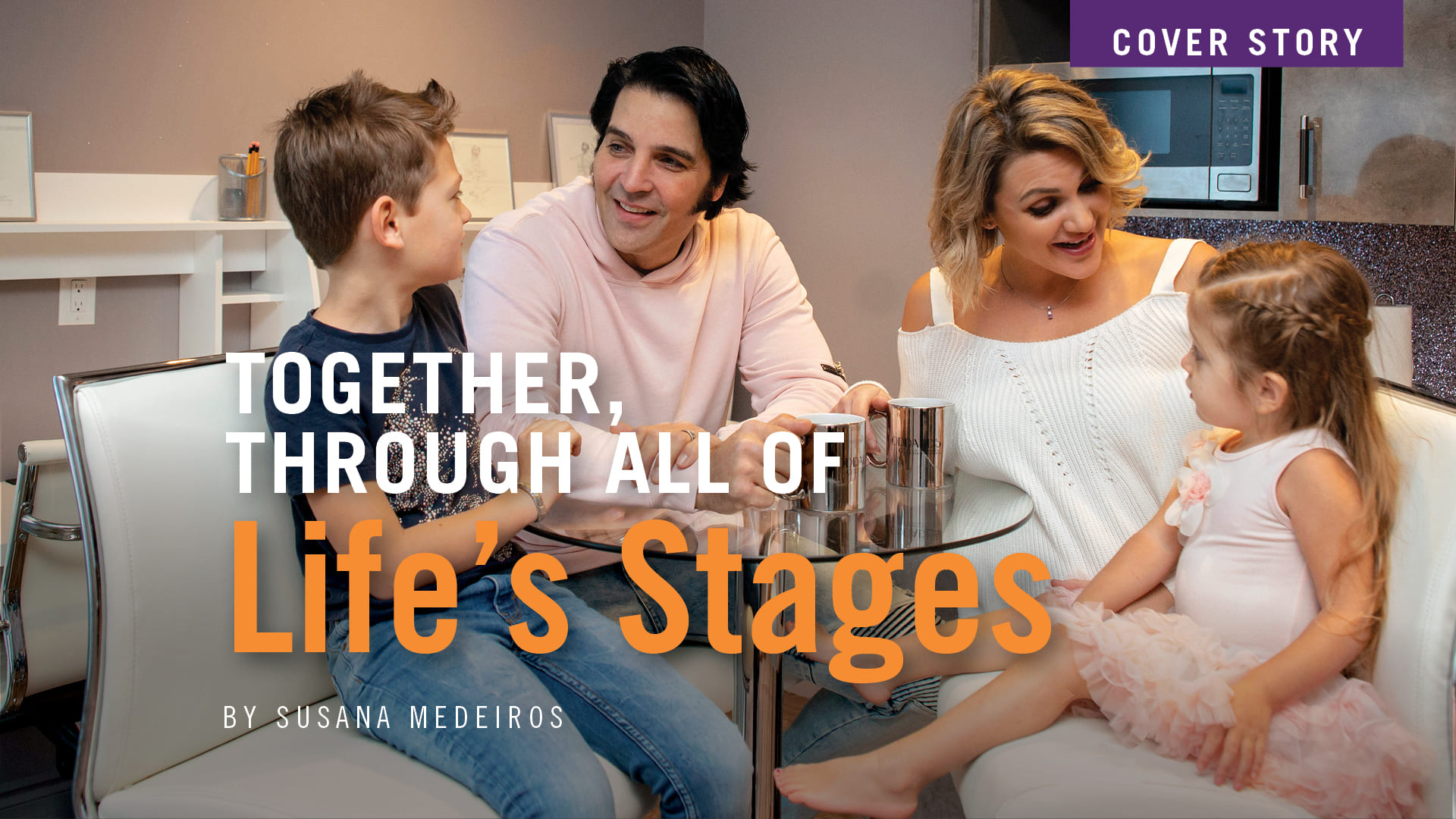 Stephen and Ashley were a world apart before the world of the performing arts brought them together. Ashley grew up in London, England in a tight knit family. She was a child-star on London’s prestigious West End, and was courted for the Russian ballet at a young age. As a pre-teen and teenager, she was an unstoppable champion, capturing the titles of countless dance competitions. She continued accumulating accolades into her young adult years, performing at venues such as Wembley Arena, and The O2 Stadium. She toured the United Kingdom and Europe with pop sensations, including Kanye West; she did gigs for television and film, such as Dirty Dancing – The Time of Our Lives, The X-Factor,and the internationally renowned British music celebration, The Brit Awards. As well, she’s worked with famous choreographers including Sean Cheeseman, Marty Kudelka, and Jeff Dimitriou. Her passion, drive, and talent has placed her in a league of her own, where only the best of the best have traveled. You name it, Ashley has done it all before the tender age of 26! And if that’s not enough, she is still performing today! But there’s still one gig she was hired for that seems to top them all.

Ashley had been hired all the way from England to be the choreographer for the Canadian production of Return to Grace, a spectacular that salutes the king of rock and roll, Elvis Presley. In March 2012, the production played at the Fallsview Casino Resort in Niagara Falls, and who better to play the lead role than Milton’s very own Stephen Kabakos?

You may recognise life-long Miltonian Stephen Kabakos (also known as Steve Michaels); he’s a successful international actor, and an epic Elvis tribute star. He’s performed at venues across the country, and has been featured in countless articles online and in print. In 2012, he met Ashley, and worked with her closely in their rehearsals for Return to Grace.

“Our lives were on two completely different trajectories,” Stephen recalls. But in the midst of her stay here in Canada, Ashley started experiencing some health issues that kept her away from home longer than she had anticipated, and Stephen took her under his wing. “Stephen was great,” Ashley shares. “He was a real friend when I needed one.” Finally, by May of that year, Ashley made a full recovery, and returned home to England. The couple’s friendship developed while they were apart. They continued to communicate through Skype, and in June, Stephen surprised Ashley with his first of many visits to England. They even made plans to meet in Paris to continue to get to know each other.

Not long after, the couple knew they wanted to make a life together. Although Stephen’s career took him all over the world, he was most established here in Canada, and in the United States. Ashley’s career as a dancer, however, could easily thrive anywhere, so the couple started her immigration process to join Stephen here in Canada. Staying true to his style, Stephen proposed to Ashley by serenading her with the Elvis classic, “All That I Am.” Ashley smiles, sharing with us that Stephen had put together a photo album entitled “Our Story,” highlighting all the memories they had made over the course of their relationship. On the last page of the album was the question, “Will you marry me?” The couple celebrated their wedding in Barbados in April 2014 with a beautiful beach ceremony–complete with tiki torches! By then, they had already been blessed with their precious bundle of joy, Indi-Grey, so they followed up their destination wedding with a church blessing for the baby in England.

While their wedding and life together was wonderful, the couple struggled being away from one another. Stephen visited England as often as he could, but since Ashley was not easily granted permanent residency in Canada, they were forced to spend time apart. If being apart wasn’t already difficult enough, Ashley began to grow ill again during her two pregnancies. They laugh about it now, but back then, things always seemed to be the most difficult for their family when they couldn’t be together. Ashley developed obstetric cholestasis and was hospitalized in England. Then, the couple’s second child, Aniya-Rosa had her first epileptic seizure–before she was diagnosed with epilepsy–while Stephen was in Australia. Finally, after four long years apart, Ashley finally found herself moving to Canada in August of 2016. With the help of a good friend of theirs at the airline that brought Ashley over from England, she and her two children (her youngest being only six weeks old at the time,) somehow managed to bring over 23 pieces of luggage at 50 pounds each, including pillows, and even curtains and curtain rods!

After getting settled into their new house here in Milton, Ashley spent the first little while at home taking care of the children, and dreaming of what the couple could make of their new life together. As it turns out, the dream was one Stephen had promised Ashley on his first visit to England–that one day, they would open up a studio together. It seemed like a natural progression for the couple; they both brought to the table different skills from their experiences in the performing arts, and teaching gave them both a driving force–a why?

In October of 2019, the couple opened Goddards Studio for Dance and the Performing Arts. It is a beautifully modern and stylistic facility offering programs in all genres of performing arts, including dance, singing, acting, and instrumentation; they are the only studio in Milton and Halton Hills offering all of this under one roof! As well, the studio offers a special program that is very dear to the couple’s hearts.

Ashley’s sister Shelley was born with spina bifida and hydrocephalus, which ultimately confined her to a wheelchair. Still, Ashley says “Shelley was the brightest light of happiness and love. One of her passions was music and dancing; her face would light up with pure joy when she heard one of her favourite songs.” She feels so privileged to have had such an incredible sister, and in Shelley’s honour, the couple developed Limitless: a specialized and inclusive program that teaches music, dance, and yoga to people with all abilities. The program works to actively ensure equal opportunity and accessibility, so everybody is offered a chance to sing, dance, or feel the euphoria that the performing arts brings to so many. As well, Limitless allows everybody to share their unique gifts with the world, to celebrate and develop their strengths, and to practice performing arts skills, all while keeping their bodies physically fit. Ashley and Stephen have even enrolled in courses to study American Sign Language (ASL) at the Bob Rumball Canadian Centre of Excellence for the Deaf – Milton to be able to extend their classes to those who are Deaf or hard of hearing.

While entering the newly designed studio space, you will immediately notice the Goddards difference! Parents can hang out at the coffee bar while their children are in class, and siblings are welcome to play in the toddler-safe play area, or use the quiet zone specifically designed for students to get homework done. Ashley and Stephen are both too familiar with having to make the most out of the day when running around to extra-curricular activities, and are determined to help their students’ families do so as well. The building and creation of the studio was truly a family affair for both Ashley and Stephen. Their families gathered to support them in every way; both Stephen’s mother, Gail, and even Mr. Goddard himself–having traveled all the way from England–came to lend a helping hand. “Phil was amazing,” Stephen says. “It’s fitting that he was here, he never stopped.” This came as no surprise to Ashley. “Growing up, my dad tirelessly took me everywhere. He accompanied me to my classes, my auditions; he was extremely supportive.” Ashley’s eyes tear up, and her gratitude for her father’s support is evident. The couple plans to continue to foster this focus on family in both their studio and in their home.

In the early years of their lives together, Stephen, Ashley, and their children were forced to be apart far more than they’d hoped. In Stephen’s words, “Sometimes life needs to get in the way before you to get where you need to be.” Now, the couple seems to have arrived at where they were going. Along with operating their new studio, the couple continues to perform in prestigious venues, such as the Princess of Wales Theatre in Toronto and again at the Fallsview Casino–where they are celebrating the 200th performance of the very show that brought them together. “We are so fortunate to do what we love,” Ashley shares. “We both lead extremely active careers in dance and the performing arts, but we have always been focused on our family.” The two of them see their new studio as both a place to do what they love for a living, and as a second home. Though of course Ashley misses her family back in England, she is thrilled to be continuing her performing arts legacy through the students at their studio, and through her own beautiful family.

Ashley and Stephen welcome you to visit them at the studio for a tour. Grab a coffee at the coffee bar, and make yourself at home. Feel free to reach them at (905) 699-4747 or [email protected], or drop by any time!

No One Goes Hungry on Sunday in Milton

Walk Your Dog! Not Just For Your Dog But For You Too.