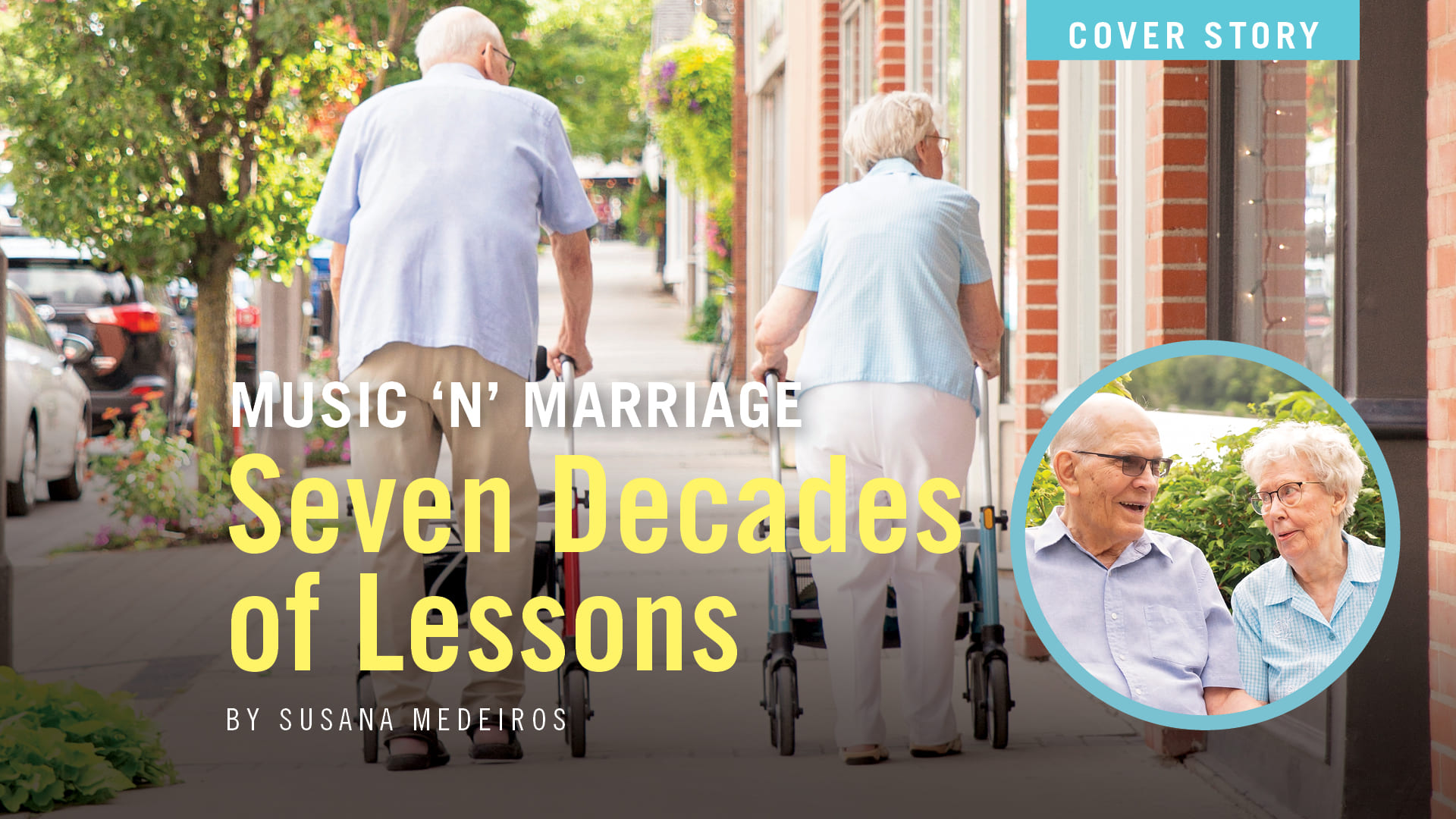 It was a beautiful day in June when the annual Milton Street Festival was underway. Gavin McLeod and his band, Hawthorne, were playing. Some friends and I were enjoying the live music being played outdoors when I noticed an elderly couple sitting on the sidewalk up against the wall of what is now Tier 3 Restaurant. She was sitting in her convertible walker and her husband was holding her hand. I guessed they were in their late seventies. And still, their bodies were swaying to the beats, and I could sense they were thoroughly enjoying the Foo Fighters cover. As my husband and I will be celebrating our 25th wedding anniversary this September, I’ve been thinking about featuring an elderly couple who has been married for at least twice as long as we have been as a cover family. I want to learn from their advice on marriage, parenting, and life in general. So, I went over and introduced myself to Orval and Lois Weins. Lo and behold, the couple has been married for 66 years!

Orval, originally from Morse, Saskatchewan, is 86, and Lois, from Edmonton, Alberta is 87 years old. They met at Canadian Nazarene College in Red Deer, Alberta. They were in a few music classes together. At the time, Lois was 20 and studying music, and Orval was 19, taking general college subjects. Orval had noticed Lois, and was influenced by a few of his friends to ask her to the upcoming Russian music concert.

He knew there was another boy who was thinking of asking her, so he had to act quickly. Lois admits he had the very best bass voice on campus, so she became interested. The two walked home unchaperoned at night after the concert, which was frowned upon in 1953. Orval insists Lois had suggested taking the long way home that night.

The couple didn’t have much of a courtship. Orval had to return home from college to help with his family’s business, where he sold cars and learned about their mechanics. The couple wrote letters back and forth for months. It wasn’t until Lois’s college choir tour brought her to Morse, Saskatchewan, that she finally met Orval’s parents. During this visit, Orval gave Lois a ring and asked her to marry him. He was 20 years old, and most people thought he was too young. Nonetheless, the couple was married in September 1953.

Their first home in Morse was a two-room house with “a path”. Lois explains this means there was a walkout to the toilet. She laughs, saying “If you ask anyone who lived in the west, they will know what a path is.” After two years of marriage, the couple welcomed their first son, Neal. Of course, marriage was an adjustment for both of them, as it is for most couples. Orval’s mother had nine sisters. Lois begrudgingly remembers there being “a lot of inspectors”. She says, “It made me feel like I always had to do my best.” When asked if she felt inadequate, she responds, “Oh no! It just made me want to grow up and take my place! I was already a great cook, and I had my own dishes. I was prepared!”

Although living in Morse was not what the couple hoped for, Orval’s father needed him there to continue helping with the family business. Orval continued working, and Lois stayed home to raise Neal and care for their home. But while Orval was gaining work experience, Lois felt she was suffocating in the home and desperately needed a challenge. Eventually, Morse began to feel claustrophobic for Orval, as well. Being surrounded by his influential family was proving to be too much. They then found themselves on a bus, moving to Edmonton, where Orval would pursue a job at Hood Motors, a Chevrolet Oldsmobile Dealer. Orval was a very valued employee. He advanced very quickly in the automotive industry, and worked hard at his job, which he eventually learned, came with a price.

By 1958, Orval and Lois welcomed their second son, Mark. The couple was living a typical married life with the challenges that most married couples faced. For years, they didn’t have a car. They held out for the weekend, when they were finally able to go out. Going out usually meant attending church gatherings; these were what the couple most looked forward to. The couple insists having “something to look forward to” is one of the most valuable pieces of marriage advice they can offer. With that said, the couple also agrees that this should never mean over-extending financially in order to be entertained. This is the other valuable nugget they share: “Don’t moan about what you can’t do. There are always years ahead.” Lois was home with the boys for the most part. She longed for a career in music, and Orval had always been very supportive, promising that they would find a way for her to pursue her musical career. Eventually, she began teaching music at their church, along with teaching Sunday school, but she always longed for more. When I ask her what her biggest regret in life is, she doesn’t hesitate to share, “I could have been somebody.” She has a small glimmer in her eye as she says, “I have the overall feeling that I didn’t accomplish as much as I could have in my life.”

Although music remained a constant passion, her years were spent raising her boys while Orval concentrated on his career in order to provide for the family. And while they were financially stable, taking annual vacations around Canada, and even in California, Orval’s career came with a price. Being so entirely dedicated to his career meant that he was absent from home more than he wanted to be. “Boys need their fathers,” he admits. During his teen years, the couple’s son Mark found himself on the wrong path, he moved away at a young age, finding himself with perhaps too much freedom. Orval’s biggest regret in life is not having been more present and involved in his sons’ lives in their younger years.

Fortunately, today the family is quite close. Mark lives in Calgary, but is always in touch, and Neal lives in Mississauga, and visits his parents often. Orval gratefully admits, “We are well taken care of.’’

Orval and Lois now live in a tidy, cozy condo in town. They claim they aren’t very mobile, but I beg to differ. One could only pray to be as independent and as mobile as they are at their age. As well, the first thing that struck me about the couple when I first saw them was how they still seemed to be best friends and even more, still be madly in love with one another. I had to ask them, “What is the one thing that you feel has kept your marriage intact for 66 years?” Lois looks lovingly at her husband, and says, “Respect and Trust. He is capable and trustworthy. Trust means a lot when you are young. I’ve always trusted and relied on him.” Orval says it’s been love that has kept them together; “I have always loved her so much. I appreciate her abilities in music and in taking care of our family and home. She has always been everything I’ve ever needed, and has always been supportive and encouraging.”

The couple continues to keep busy by enjoying live music and attending events together. Lois says, “I don’t know what’s in or out but I am always humming.” They keep a hymn book on the kitchen table, and will still hum in the middle of the night if they can’t sleep because it brings them comfort. It’s no coincidence that we met at a musical event during the summer that marks my husband’s and my 25th wedding anniversary. I needed to be reminded of what makes a marriage successful and lasting, as I believe we all do from time to time.