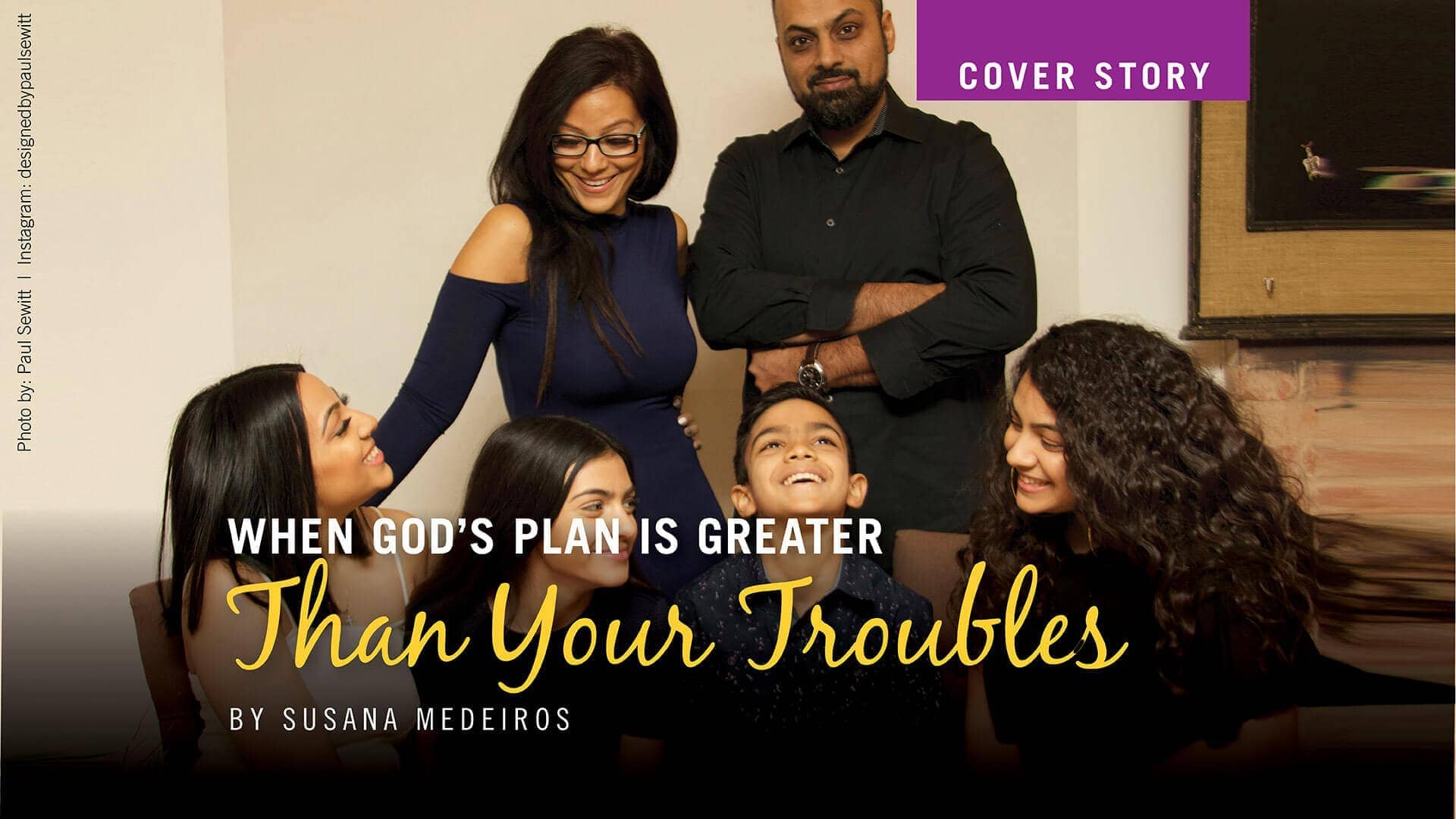 When God’s plan is greater than your troubles

If you live in Milton, chances are you’re already familiar with our beautiful cover family. Over the years, Daphne and Shahzad Siddique have been known as small business owners and pillars in our community. Consistently giving back and supporting many charitable causes including the MDHF, they are a strong and positive presence in Milton. They’re a close-knit, spiritual family who run two successful businesses in town and seem to have it all; and yes, they agree they do have it all, but they will tell you it hasn’t always been this way. They will also tell you that without family and God, they would have nothing.

Daphne and Shahzad have known each other since childhood. During their courtship, the couple found that their faith bound them. While chatting with Family Matters Magazine, Daphne recalls a time Shahzad said that what he loved most about her was how much she loved God. Shahzad laughs and says “I did say that! All the other shorties were just tings! Dee was different that way.” The couple was married in August 1998 and shortly after, they had their first daughter, Zahra. But marriage wasn’t as easy as they had anticipated. The couple went through some trying times which at one point led to a separation. During the separation, Shahzad often visited Daphne and Zahra. It was during Easter that year that Daphne started feeling distant from God, and longed to attend church with her daughter again. One day, when Shahzad was visiting, she asked him if he would be up to joining them for mass. Shahzad took this as an opportunity to turn things around, and suggested attending a church he had heard of: Pastor Roger and Maxine Gushway’s church. Coincidently, Daphne had just met a couple the Saturday before Easter Sunday who were members of Roger and Maxine’s church. The two of them decided to go, and during the service, Daphne was randomly called to the altar. She was then told by Pastor Maxine that divorce was “not an option for her.” In the years following, this congregation continued to mentor and guide Daphne and Shahzad in their marriage. They were told God had a plan for them, so the couple became committed to making their marriage work.

Part of God’s plan was blessing them with three more children: Asia, Mia, and Elijah. Shortly after having their third child, Shahzad and Daphne decided to venture into small business ownership. They decided to buy Milton Cleaners on Commercial street, which included a beautiful family home above the business, hoping to find the work/ life balance they sought after. This was certainly not the case. The 80-hour work weeks and devastating financial losses year after year were more than the family could endure. The couple eventually made the difficult decision to offer Daphne’s father and mother the business, who were able to turn things around for Milton Cleaners and continue to offer their services to their valued customers. They weren’t, however, going to give up on their entrepreneurial dreams.

In 2008, Shahzad decided to embark on a new venture in Africa. Leaving his family behind in hopes of shifting their lives, he pursued the vegetable oil business. But after three years in the Ivory Coast and Ghana, things were worse than they had ever been. Their family home was at risk of foreclosure and their vehicle had been repossessed. Shahzad had no choice but to return home. “I felt like a failure. I had let down my family,” he shares. With the foreclosure just days away, the couple needed a miracle to keep their home and put food on the table. “We had nothing left but God,” Daphne recalls. Shahzad remembers feeling helpless and wounded. With very few resources and job leads, he swallowed his pride and answered a job posting as a night-shift clerk at the Sobeys that was set to open in town. It would only pay $16 per hour, but it was more than they had. Before this, Shahzad worked as a project manager for both Bell Canada and the University Hospital Network. The blow of the failure in Africa destroyed him mentally and emotionally. Regardless, he prepared himself for the Sobeys interview; “what I didn’t know was that God had a better plan.”

The night before accepting the job at Sobeys, Shahzad ran into an old high school friend. While catching up with each other, the friend told Shahzad about his gold business. Ashamed of his own situation, Shahzad didn’t mention the challenges he was facing. Instead, when his friend asked him what he was up to, Shahzad casually mentioned he was in transition. His friend told him he should seriously think about the gold industry. After returning home, he had trouble sleeping and couldn’t stop thinking of this idea. He spent the entire night researching gold and its value, and how he could start his own business in the industry. In the morning, he told Daphne he didn’t feel right about Sobeys, and instead wanted to at least give this “gold thing” a shot. Daphne gathered all of the gold she had received as gift on her wedding day, put it in her husband’s hands, and said “I believe in you.” That wedding jewelry was the start of Gold Dollar Exchange. Shahzad placed an advertisement on Kijiji titled “I buy gold” and within minutes he had plans to buy a seller’s jewelry, and many more within the following days. Today, Gold Dollar Exchange is thriving, going on their eighth year of business in Milton. Needless to say, through God’s grace, they were able to save their home.

As their financial situation improved, The Siddique family felt relieved. Their business was growing steadily and things were going in the right direction. As they grew closer to God, Daphne and Shahzad also grew closer to their parents. Both Shahzad’s and Daphne’s parents were very active in their lives and their grandchildren’s lives. During difficult times, Daphne’s dad would always tell Shahzad that he believed in him, and knew that he would be very successful one day. This made losing Daphne’s father all the more devastating, as he passed away in September of 2014. During this time, Daphne admits that she was angry at God for the first time; “I spent a long time resenting God.” In the dark times this time around, it was the children who kept the family together; their oldest daughter Zahra would say to her mom “all we have is God. You and dad have always taught us that.”

Their faith was shaken once more in the summer of 2018, when their daughter Asia, 15 at the time, was involved in a car accident that almost took her life. The accident left her with difficulties walking, and seriously affected her memory and ability to focus. Suffering from a severe concussion, she was unable to attend school at all, and is still not able to completely participate in a regular school schedule. This also affected her social life drastically and brought about feelings of depression and isolation. Fortunately for the Siddiques, The Freedom Centre community offered relentless support and prayers. As Asia began to finally recover, Shahzad’s mother who had been a pillar of prayer in their family passed away in November 2018. It was during this time that Asia, who was very close to her grandmother, began to find her voice. Instead of falling into an even deeper depression, she helped bring healing to her family by writing and recording a song dedicated to her late grandmother. She debuted her song “To The King” at her grandmother’s funeral service, which can now be found on YouTube.

Shahzad, Daphne, and their four children have endured many trying times. They all agree that at no time did they ever let the feelings of despair take over because they knew their faith would see them through. As a family, they continue to be very active in their community and with their church. Every Sunday, they drive to the other end of the GTA and attend a two to three-hour service. It’s what keeps them grateful and grounded. The Siddiques have also taken the opportunity to renew the space that was once Milton Cleaners. Today, underneath all the fresh paint, there are biblical scriptures written by the couple and their children. These scriptures are a symbol of God’s presence in their home. The Siddiques may not see God, but they know that behind it all, God is there— in their hearts and in their home.