The Pain Behind the Laughs

On a sunny day in May 1991, when Denise Morissette – a head professional skating instructor – boarded a Mississauga Transit bus, she had no idea the ride she was in for. John Cooperwhite was her bus driver; The two shared conversations on their bus rides and eventually found themselves married to each other on July 10, 1993. When the couple met, John had two children, and Denise had one son, Derick. The rest of their lives would be entertaining to say the least. It would be filled with unconditional and undying love,
but not without its tears and heartaches. No matter what the couple faced they would say “we have each other.”

The marriage started to face challenges in the very beginning, when John’s ex-wife moved to Scotland with his two children, before Denise and John were married. Between paying for support and legal fees to gain access to the children, their financial situation became very stressful. On one or two occasions, the couple found themselves at The Salvation Army to feed the family. John’s children were becoming more and more estranged due to the distance and this, along with the financial situation, was putting a strain on John’s emotional well being, and consequently, the marriage. Their first years of marriage were filled with rough patches and enormous amounts of stress.

Soon after the couple were married, John began to feel that Denise had unusual behaviours in many situations. He couldn’t understand why she obsessed with things being lined up and symmetrical, ie. why everything had to match. He soon learned that Denise suffered from Obsessive Compulsive Disorder. Denise would often obsess in the grocery store or in a department store about which sweater was the most perfect, even though they were all the same colour and size and on the same rack. It would be so severe sometimes, that she would sit on the floor and spread out items so that she could closely examine each one before making a decision. Her OCD has even been reason for store clerks to suspect she had been attempting to shoplift. It was very difficult for John to deal with until he had a full understanding of the disorder. The couple agrees that the OCD took a further toll on the marriage.

As the years passed, the couple endured many dark days. John suffered two heart attacks; Denise was diagnosed with thyroid cancer, underwent gallbladder surgery, and was a victim of two serious car accidents that have left her in constant pain. This pain though, will never be compared to the pain they suffer since their son Derick took his life at the age of 25 in February 2010. The couple were away at their newly purchased Florida home when it happened.

Derick suffered from anxiety from a very young age, then later depression. “He was always a very ambitious boy,” John remembers. From a young age, Derick would dream of becoming a millionaire and had many ideas for how he would achieve this goal. He was active in sports and many activities. It wasn’t until high school when John and Denise started to notice the change; He spent more and more time in his room and socialized less. His taste in music changed drastically. “We tried to understand him through his music. We couldn’t even get through one song, it was so graphic and dark.” Denise urges parents to not be afraid to talk to their kids. Keep the doors of communication open and look for changes in their behaviour. Take them seriously.

John and Denise remain married today. “We are more in love than ever,” Denise smiles at John and he nods and smiles back. Denise runs an entertainment company called Fun-Shine Entertainment. The couple both love to entertain at events, Fun-Shine Entertainment is a full service entertainment and party company. Sneezy the Clown is the main character played by Denise, herself. John is a bagpiper and plays his tunes every chance he gets; He played “Amazing Grace” at their son Derick’s funeral, and at his father’s funeral, along with many other events. 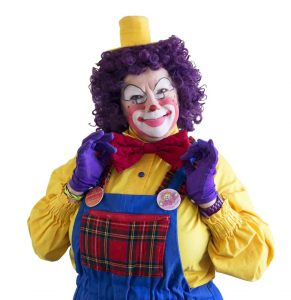 Bringing smiles to people’s faces is how Denise deals with her pain. In the past, Denise has always kept her personal identity a big secret. “It was very important to me, that Sneezy and Denise were two separate identities.” However, in light of recent “creepy clown” sightings, Denise felt that at this point revealing who Sneezy is would help people realize that clowns are real people too and professional clowns entertain and bring fun and laughter to all events; She has been doing so for nearly 18 years, and continues to do so, along with being a media and lifestyle photographer. The couple is always looking for sunshine in their lives despite the constant despair they have had to deal with over the years. They believe that no matter what comes their way, they will remain together through it all. They have recently sold their home in Milton and have realized their dream of buying a country home. Now that John is retired, there will be more time to start making their own sunshine. They believe wholeheartedly, that this change will be the beginning of better days to come.